It was a topic that came up at our very first meeting.

I found the response to be honest and genuine – much like the people and mission of Echelon.

The Salvation Army is an organization rooted in Christianity. And like the nonprofit it falls under, Echelon also welcomes and respects individuals of all religions; their only request being that while they honor other’s beliefs, that you do the same with theirs.

It’s actually stated in our mission to “meet human needs in His name, without discrimination.”

I have seen this for myself, firsthand. When we prayed over one of our board members as he left us for Korea. At the start of an event. Before handing out sandwiches to the homeless. 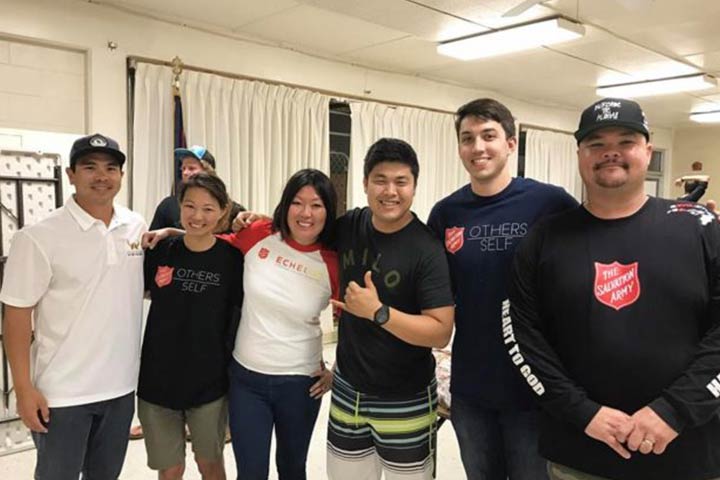 In fact it was on a Sunday night, spent distributing PB&Js at Aala Park that this spirit of inclusion was most obvious to me. We really weren’t there to feed people’s stomach, or even pray for them (though it was offered). We were really there to listen, share a kind word and provide companionship – even if just for a few minutes – no matter what their beliefs were. Or mine.

I have to admit, that when I was asked to be a part of Echelon that I never considered the religious aspect. Only the work that we would do.

At a time when our country is divided on many issues, it is reassuring to have found a group of individuals blind to the differences that set us apart and instead focused on seeing how we each can make a difference. That in and of itself has been the greatest blessing and a step towards supporting Echelon’s mission of doing the most good.

That I think, is the greatest blessing.