The Salvation Army Responding to Puna Lava Flow
Update No. 12

-More than 50,000 meals served at shelters and more than 1,000 households assisted at distribution center-

Hilo, Hawaii, HI [July 30, 2018] – The economy in the Puna District is receiving a boost from a surprising source, the shelter meal services being offered by The Salvation Army’s Emergency Disaster Services [EDS] outreach efforts. After initially receiving generous in-kind donations from local restaurants and certified kitchens during the early days of the lava event, The Salvation Army’s EDS team has been purchasing food for the meal service at the shelters from local businesses and restaurants in Pahoa, Keaau and Volcano Village for weeks. 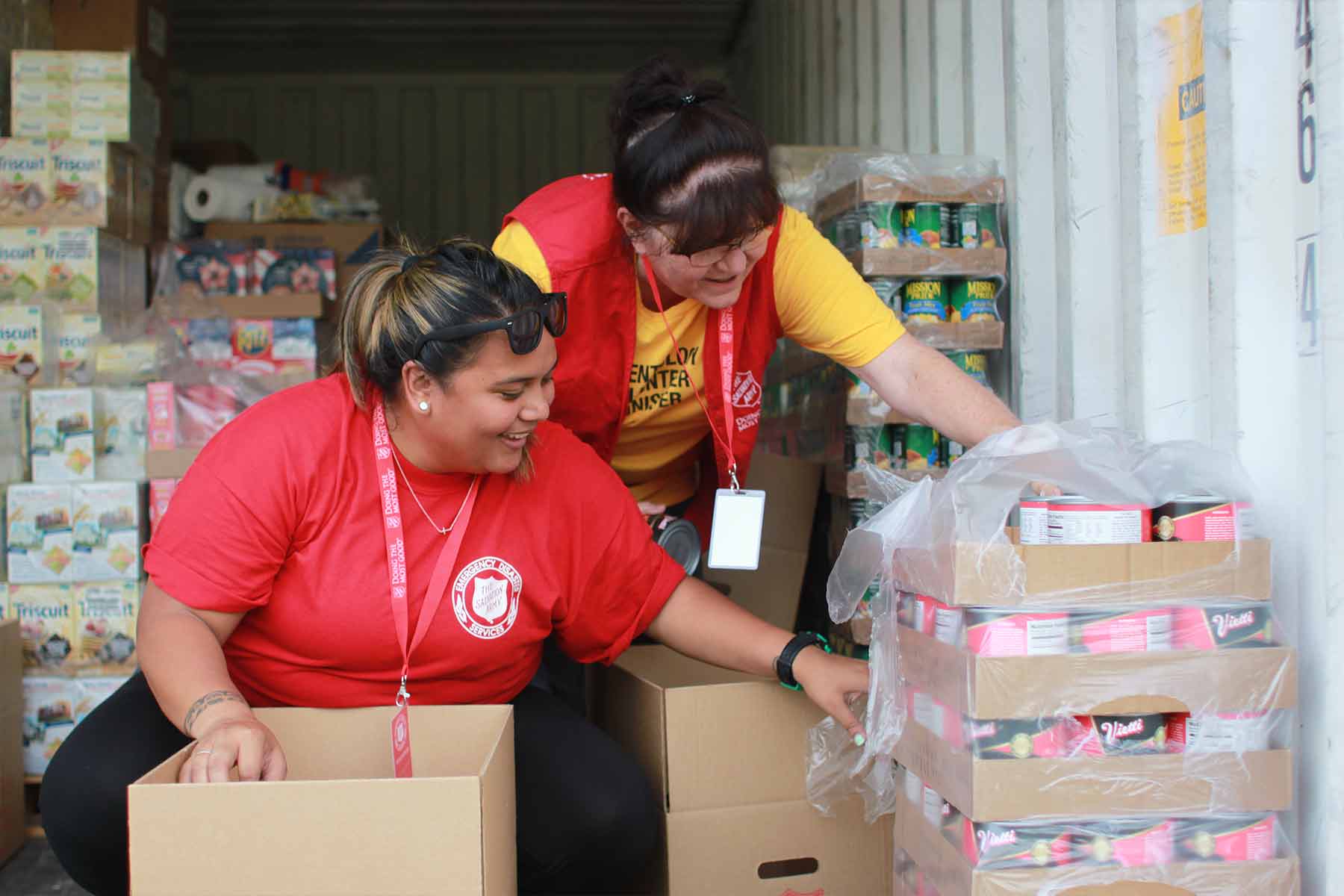 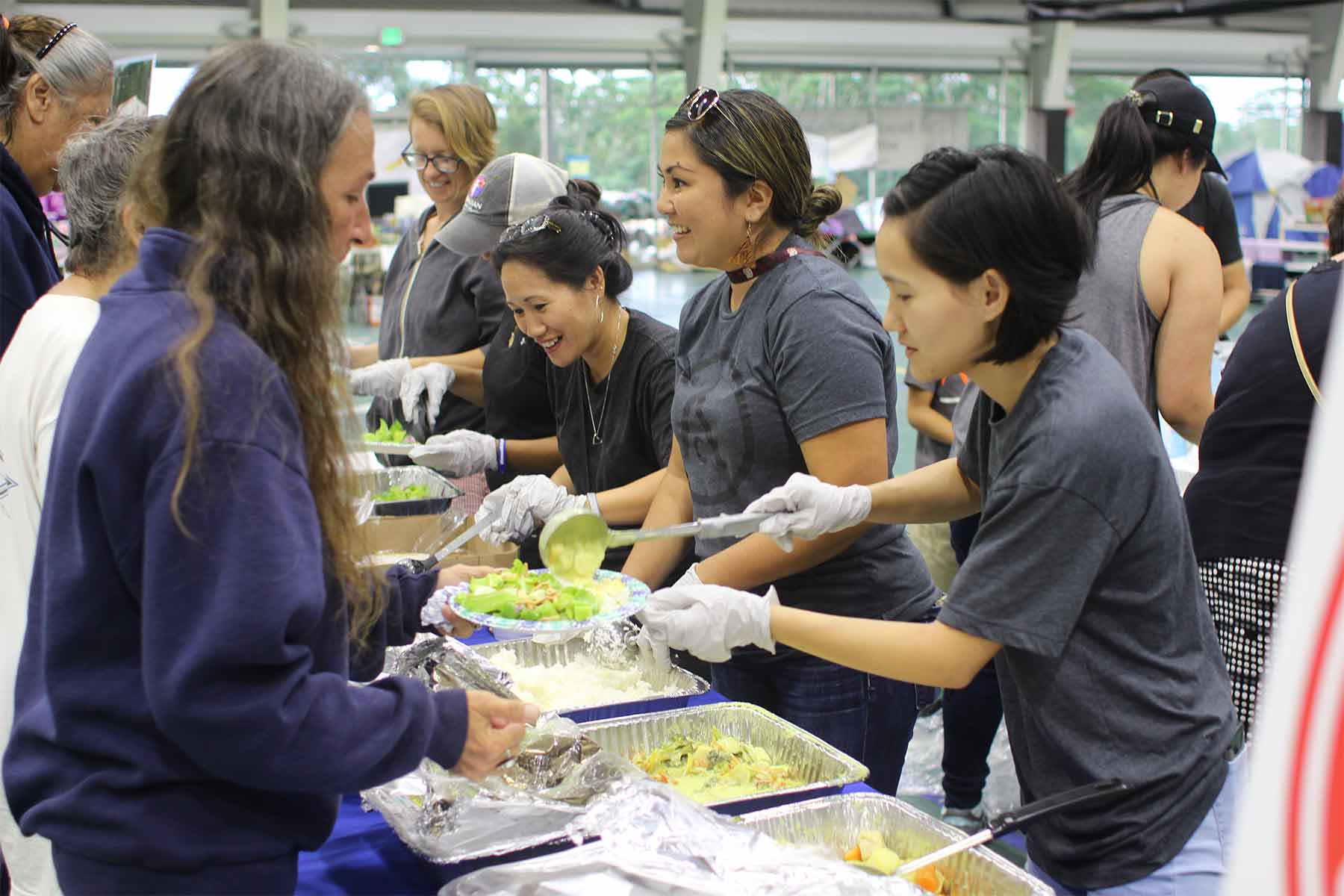 “We have been supporting the local economy with the purchase of meals from businesses and restaurants in the Puna District,” said Victor Leonardi, EDS Coordinator and Incident Commander for The Salvation Army. “It’s really a key component to our EDS response efforts. Thanks to generous monetary donations, we’ve been able to sustain meal service at the shelters by purchasing most meals in the local communities that have been most affected by the downturn in business. It just makes sense to support local businesses.”

“The Salvation Army’s efforts are helping our community out twofold; not only are they feeding evacuees and those in need, but also they are supporting the ongoing economy of this disaster zone,” said Matt Purvis, president of Mainstreet Pahoa Association and owner of Tin Shack Bakery. “This is a thoughtful way to relieve this community's economic disaster as displaced people are provided their basic needs."

Pancho and Jessie Aguilar, owners of P&J Tacos De La Calle, work and live in Puna and have been helping to feed evacuees at the shelters. “We had donated and served food the first three days of the event and were already back doing our regular business at the Kai store when Victor from The Salvation Army called,” said Jessie. “They wanted to support our taco truck business and so we stopped business as usual and have dedicated our time and energies to the shelters for the summer to provide additional meals there where we were able. It felt really good to be helping since a lot of our customers, who've since become our taco ohana, were in the shelters. I grew up in Leilani Estates and Black Sands areas, so it’s really close to home and it only felt right being a part of it.”

The Salvation Army also has been providing essential items and thrift store vouchers to those in need via a distribution center they operate at Pahoa three days a week. “More than 1,000 households have stopped by for assistance at our distribution center,” said Leonardi. “We’re providing those in need with cases of water, food boxes, and more for their immediate needs as well as providing emotional and spiritual care. Additionally, we’ve provided thousands of dollars of vouchers to our thrift stores to help those in need as they begin to move forward with their lives.

MEAL SERVICE – Since May 9, The Salvation Army has been coordinating the food service with three meals per day to the emergency shelters in the Puna District. As of July 29, a total of 50,588 meals have been served including 9,159 vegetarian meals. The Salvation Army is regularly purchasing meals to support vendors in Pahoa, Keaau, and Volcano Village.

DISTRIBUTION CENTER – Since May 13, The Salvation Army has been operating a distribution center at the Pahoa Community Center in the Puna District. As of July 29, there have been 1,936 visits from 1,063 households who have received donations from the distribution center including 1,533 mosquito repellant cans, 1,596 food boxes, 1,327 cases of water, and 1,028 hygiene kits. The distribution center is open Tuesdays, Thursdays and Saturdays from 8:30 a.m. to 10:30 a.m.

DONATIONS NEEDED - During emergencies, the best way the public can help is to provide monetary donations which allows the delivery of the exact relief supplies a community needs including the ability to purchase meals and key distribution center items to support the local economy. Plus, The Salvation Army uses 100 percent of all donations designated ‘disaster relief’ in support of disaster operations. To donate, click below.


The public also may support The Salvation Army’s EDS efforts with monetary donations via the following corporate partnerships: