Walk by Faith Not by Sight

Walk by Faith Not by Sight


Mark, a veteran of Desert Storm, developed severe cataracts in both eyes, nearly blinding him, which caused him to lose his job, his housing, and his way of life. Suddenly homeless on the Hawaiian island of Maui, Mark would walk 23 miles - one way - to the local VA center to try to get help with his almost non-existent vision. Then he would walk the same 23 miles back. He would go to sleep at night, wake up in the morning, and do it all again. Every day. For three years.

What made him spend every day repeating this same, seemingly futile exercise? Here's a look at Mark’s story and why, and how The Salvation Army was able to help him through it. 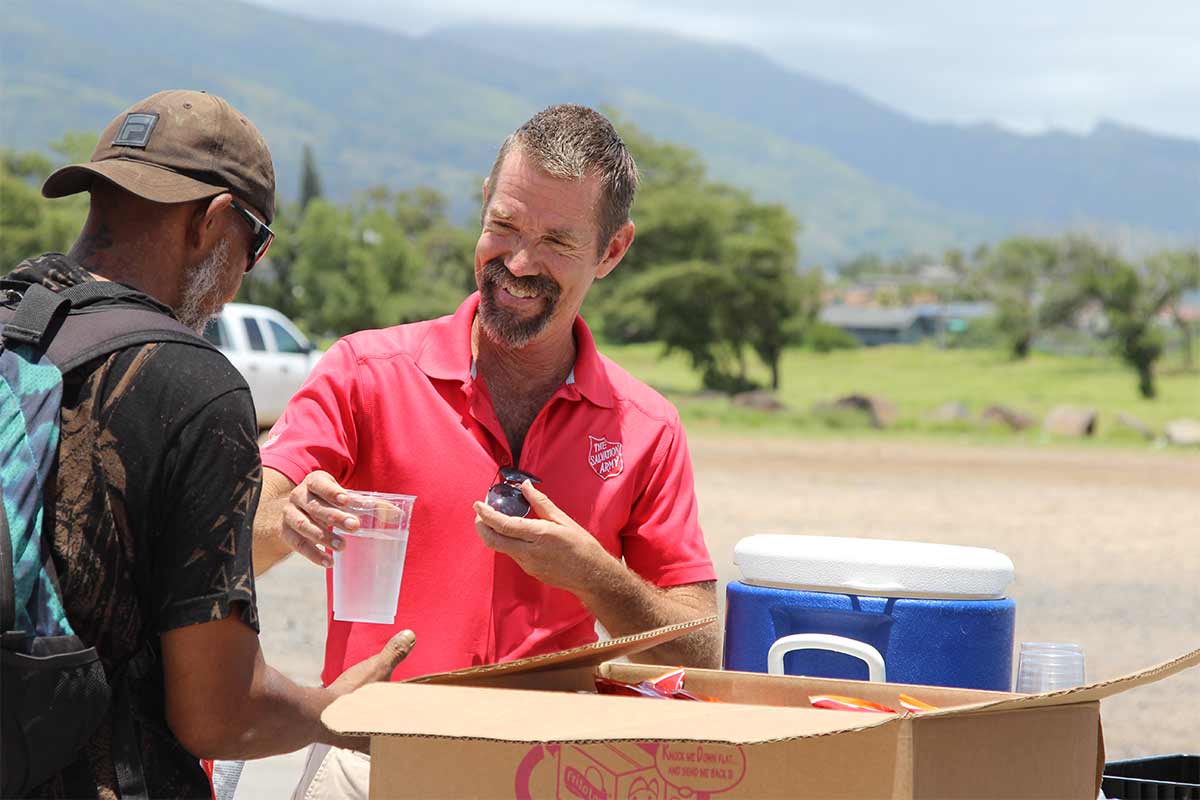 Mark
"I was an infantry officer in Iraq, Desert Storm and I got out in 1991. Unfortunately, I was beginning to lose my vision from cataracts. It covers over the eyes so you can't really see out of the eye anymore.

It got real cloudy in my right eye. I could see just a little bit and I completely lost vision in my left eye. You can't read signs. You can't make out people's faces.

I started bumping into things because I couldn't see them. I really started having a lot of setbacks in my life.

I was sleeping out in the bush or on the beach. I could get on the road and I'd walk to the Veteran Center which was in Wailuku. So, it was from Lahaina to Wailuku and back."

Envoy Kevin Nagasaki
"That is actually 23 miles. One way. Twenty-three miles. Driving from Lahaina to Kahalui, I’d seen him on the road. You could tell he was military. He had backpack. The way he dressed: whitey tighties, shirt tucked in, and cutoff jeans, you know."

Mark
"And the object was for me to meet with somebody at the VA that I could talk to and try to get some help with my vision. So, I stayed close to where the railings were so I wouldn't be near the traffic. But by the time I got back at the end of the day I was really tired."

Mark
"I lost count. I lost count. We’re talking about a three-year period that I was trying to get help from the VA.

I had a little Walkman radio and I used to listen to a Bible teaching every day. That's how I actually started learning the Bible and I just kept repeating: 'walk by faith and not by sight.'

I went to The Salvation Army Church in Lahaina for a Sunday service there."

Envoy Kevin Nagasaki
"Then we asked him to read a scripture and he brought his Bible. It was a big print and he actually – literally - put it to his face in front of one eye to read the Bible."

Mark
"The church prayed with me in Jesus name for a miracle. I didn't know what or how that would come about but I believed that God could change my circumstances.

The Salvation Army helped me with applying for my VA benefits, getting the copy of my discharge, that kind of stuff.

And then shortly after that The Salvation Army got a call that the VA wanted to fly me to Trippler Army Hospital on Oahu for cataract surgery. That's when the breakthrough came.

They drained the fluid out of it. They did a surgical lens implant. And when they took off the bandage, it's blurry. Your eye starts to focus, then it all comes in clear.

Practically, it’s like the whole world just opens up again. When you haven't seen for a long time and then you get your vision back and it's clear, it takes your breath away."

Mark
"It was it was really clear to me that God had answered a prayer because nothing before that had moved anything at all. I shared my testimony in Lahaina then the word kind of got around.

The Salvation Army offered me a job: Homeless Outreach Case Manager. I've been doing that ever since. We bring food, we bring hygiene, clothing, things like that - basic needs.

We’ll help them get into homeless shelter, help with getting ID, getting employment."

Envoy Kevin Nagasaki
"We don't care if you were an alcoholic, a druggie. It didn't matter if you didn’t take a bath for two weeks. Didn't matter. We still welcome you with loving care."

Which I can see clearly now. Because if I hadn't gone through that experience I never would be doing what I'm doing now."